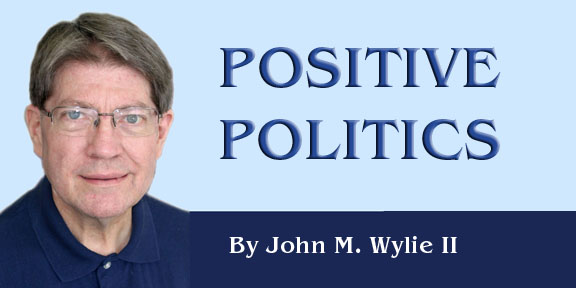 We pray for public officials, rulers and leaders in our own time. Give them wisdom in decrees and decisions, a will for the common good, and the courage to work for peace in local communities and among the nations. – Prayers of the People, St. Andrew’s Episcopal Church midnight, Dec. 24

With all the chaos, hatred and inhumanity swirling around our nation’s capital, why would anyone chose to spend the Christmas season there?

Only one reason makes sense: family.

But this year, family and tradition brought us a glimmer of hope for a much brighter future, one that goes far beyond the Christian tradition, even though it was in an Episcopal church we’d visited just one before with a rector we’d never met.

From the time Faith and I became a committed couple 49 years ago, and certainly after we married in 1976, we always assumed we’d have a son and a daughter.

James came along in 1983 and 20 years later he brought Alison into our lives. She was already our daughter before they married, ironically, five years after they met at the University of Tulsa.

Both wound up in graduate school at the University of Oklahoma and were at their respective homes in Oologah and Katy, Texas for Christmas.

James, the newly minted OU lawyer, found his dream first job in Washington just months before their Oct. 2008 wedding in Santa Fe, and Alison was able to complete her post-graduate degree from OU in DC so we now had another family tradition—Christmas in the capital.

Midnight Christmas Eve services had always been part of my family tradition, whether in person or the Pope’s Christmas Mass at The Vatican, held for midnight broadcast local time in the US.

Christmas in Oologah, Texas or Washington with our new blended family (including Alison’s mother, father and brother) was the new tradition; with midnight church a part of it wherever we were.

It was hard to be joyous this year, but Rector Rev. Timothy Johnson provided even more: Hope.

He spoke of a little girl, frightened because she had left her toys outside and her mother reminded her that she had to bring them in before bed. It was dark, she said, and she was scared. When her mother said God would be with her, the girl replied, “I wish God had skin,” meaning she wished He was a visible person.

With the birth of Jesus, God became a man with skin—who was announced first, the Bible says, to shepherds watching their flocks at night who were greeted by angels and were the first besides Mary and Joseph to see the just-born Jesus and fully understand the meaning of his arrival.

He chose shepherds who smelled bad—the lowest of the lower class, not wealthy or powerful or even middle class—to deliver the message to the world.

That message resonates today louder than ever today, he told the congregation, because we are all told to deliver the Jesus’ principles to the world—work and pray to relive human suffering, the cold, the hungry, those with addictions, those ravaged by war so they can live without fear, those whose safety is threatened so they may instead dwell in safety, and that “all creatures, and creation itself, may be restored and renewed.”

Nowhere in the world needs to hear those calls to action more clearly than the powerful and wealthy in Washington—the very classes ignored by the God of Christianity, most other deities, or the basic internal moral compasses of decent people worldwide even if they profess no religious faith.

And Rev. Johnson spoke to that universal truth, noting that this year’s Christmas offerings would go not to the operations of the large, historic church but to an ecumenical mission named to help those in need.

It offers a small example of what we see daily in Oologah, Rogers County, Oklahoma, and the other parts of the United States where the leading citizens (and in some cases even the political leaders) remember their first duty is to the needs of others.

In this case, those others are homeless—often through no fault of their own but due to illness, injury and other misfortunes. They live in an area of our capital metroplex where they might find a bed at night but no shelter from the area’s bitter winters or broiling summers, no food, no place to shower and no-one trained to help them find resources to build a better life. All that is available from Congregations United for Compassion and Empowerment—churches that might disagree on aspects of theology but agree on the basics.

How, in fact, could anyone who claims to be human disagree? In our capital, beset by blood-lust among the powerful, we saw the humanity and generous spirit of the real people. We saw the same thing in Oklahoma, and Kansas, and Missouri as we traveled this Christmas.

God, in whatever form you believe in him or in a basic sense of good and evil, has skin. In human form, it is covers each of us.

Together, we can put the world back on course. May historians remember 2019 as the year that new revolution began.