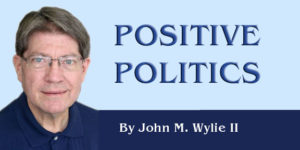 Independents can vote in the Democratic primary simply by asking for a ballot.

“I was able to meet with Beau Saturday in Claremore and watch her interact with the average citizens of Rogers County during the annual Democratic picnic. I’ve been watching her work on the issue of Oklahoma becoming the nation’s earthquake epicenter, as both a lawyer and citizen, for several years.

“This issue should have been handled by the Commission long ago. As an earthquake victim with home damage, a concerned citizen who has seen far worse damage, and an attorney who has been fighting to actually fix the problem and bring justice to those harmed, Beau Williams knows what needs to be done.

“On her website, she has provided the best one-page description of the enormous responsibilities the State Constitution places on a Corporation Commissioner I’ve ever seen. It has authority over everything from the oil and gas industry to electric, natural gas and telephone utilities to the safety of railroads and oil and gas pipelines. Its authority even extends to ensuring that citizens get a full gallon of fuel when they pay for one, by regularly testing the accuracy of gas pump metering accuracy.

“It is not a job for the faint of heart, and certainly not for those who cannot understand the basic intent of our state’s founders: That the public must get safe, reliable service from private companies who literally hold their lives and family budgets in their hands. But those companies must also be allowed to earn a reasonable profit to provide that service.

“For too long, the equation has been out of balance in favor of the industry. A true balance is needed.

“Beau Williams has shown that she understands, using six simple words to define her campaign: ‘Stop the quakes, lower the rates.’

“She has shown that she can conquer whatever challenges life sends her way—from mothering her younger sister at an early age following the death of their mother to winning a battle with cancer.

“Beau Williams has the tools needed to do the job our state’s founding leaders envisioned for the Corporation Commission: Ensuring the prosperity and safety of all Oklahomans by properly regulating the companies that most directly affect both. I am proud to endorse her for this office,” Wylie said.

Wylie has covered the utility and energy industries and environmental issues for 45 years, including being one of the nation’s first full-time energy/environment writers at a Top 25 newspaper, The Kansas City Star; covering the industries and their regulators in a wide swath of the U.S. and overseas for a dozen McGraw-Hill international publications, and publishing the Oologah Lake Leader for 35 years until selling the newspaper last year to pursue writing and public service projects. His hundreds of awards include being part of the group that earned the Star a Pulitzer Prize in 1982. He was inducted into the Oklahoma Journalism Hall of Fame in 2012.

Oologah, best known as the Birthplace of Will Rogers, also has Oklahoma’s largest coal-fired power plant. He ran for Corporation Commission in 2004. Although losing to incumbent Denise Bode, his campaign forced the OCC to fully comply with the Oklahoma Open Meeting Act for the first time in its history and to actually inspect gasoline pumps regularly so consumers got all fuel they were charged for.

He and his wife, author Faith Wylie, literally live next door to Will Rogers’ Birthplace on land that once was part of the Dog Iron Ranch where Will was raised.

“Will was a savvy judge of how government should work, and I think he would have liked Beau Williams’ approach. As he once so aptly put it, ‘It takes nerve to be a Democrat. But it takes money to be a Republican.’ Beau’s finance disclosure report filed Friday with the Oklahoma Ethics Commission included donations from teachers, firefighters, a window washer, a semi-retired farmer, respected attorneys, health care providers—but none from Big Oil or Big Utilities. ‘Nuf said,” Wylie concluded.